Welcome to Life Images by Jill

Welcome to Life Images by Jill.........Stepping into the light and bringing together the images and stories of our world.
I am a photographer, writer and multi-media artist. Through my blog I am seeking to preserve images and memories of the beautiful world in which we live and the people in it.

PLEASE CLICK ON THE IMAGE TO GO TO MY RED BUBBLE STORE. The mournful strains of accordion music drift slowly up through the filtered early morning light and seeps into my consciousness. I turn over and pull around me the delicious folds of the feather quilt. The music is a sound I hear every morning. It wakes me gently with its soft kiss.

I stretch, and rising, walk across the cool tiled floor to fling open the window, and leaning out turn my face towards the crisp sea air; it’s salty moisture coming to me on the gentle breeze to settle on my face. Along the waterfront I can see the old man sitting on his stool in his usual place in front of the high stone wall. I cannot see his face, as it is hidden by the shadow of his cap, but I know his lined face looks as worn as the open leather suitcase by his side.

Salvatore Bellini. Every morning he cycles his bike along the winding cobbled streets through Cefalu and takes up his position here on the waterfront. As he plays he looks longingly out across the water. He is playing for the love of his life Antonella, who was lost in the sea between during the dark days of the last war: and perhaps in the hope his music will bring her back to him.


I had rented an apartment for the summer in the medieval town of on ’s north coast and had met Salvatore on the day that I arrived. Drawn by the music I had followed the sound and found him. As he played his haunting tune he was gazing out to sea with such a look of yearning in his blue eyes that a tear had escaped unbidden from my eyes. And at that instant he had looked up at me and smiled.
Travel Writing and Photography Course - Fremantle, 7-8 March 2009
Last weekend I attended a travel writing and photography course run by writer John Harman, and photographer Dale Neill. The piece you read above - Salvatore Bellini - is an entirely fictitious piece I wrote from the photo you see of the accordian player taken by Abigail Harman. To log onto John, Dale and Abigail's sites please refer to my web links. 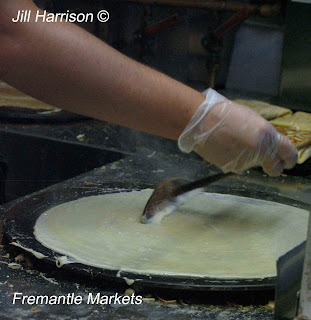 With a practised hand Antoinette ladles the creamy batter onto the sizzling plate. At the window a young girl sits transfixed watching her swirling the mixture evenly into a thin round circle and then flipping it over with a long spatula.

Antoinette smiles at the girl and the smile lights up her face. Every weekend at the markets she stands here before the steaming hot stone pouring, smoothing and flipping to create the crepes that will make their way into the mouths of the gathering crowd: the creperi has a reputation for good food and people are willing wait.

It is a long way from Antoinette’s village in Tuscany and the well scrubbed wooden table in her grandmother’s kitchen and the young girl reminds Antoinette of home. She smiles to herself and softly speaks a few words in Italian.

The Fremantle markets attract hundreds of people every weekend. They come for bargains, fresh fruit and vegetables, a special gift perhaps. It is a vibrant hive of bustling life, colour, sights, sounds, smells and languages. A moving kaleidoscope.

For Antoinette it is the start of a new life far away from her homeland.

The character is entirely fictitious, but to taste delicious crepes please visit Michelle's Crepe Suzettes at the Fremantle Markets Saturday's and Sundays.
Posted by Jill Harrison at 8:02 am No comments: